Although not required, many towns offer both recreation and travel ball under one of these national youth league organizations:

There are a lot of similarities between leagues but because each lague has its own tradition, they do have some significant differences in rules and customary practices.

AABC was founded in 1935, focusing on younger teenage players in the US, Puerto Rico and Canada. AABC coordinates its programs with USA Baseball and the American Baseball Coaches Association (ABCA).

Some leagues affiliated with AABC may elect to go with divisions that are entirely in age-range.

Under the AABC format, each league has a minimum of four teams with each team playing at least six games. The winner from each league goes on to state-tournament play. The winner of each state tournament games, then goes to regional play and from there to the world series.

American Legion Baseball League is intended for 13-19 year old players from US and Canada. The name “American Legion” comes from the fact that the American Legion Department of South Dakota established the program in 1925 to give local kids “an opportunity to develop their skills, personal fitness, leadership qualities and to have fun”.

Referred to as 50/70 play, this allows base runners to lead off, stealing is permitted and pitchers work out of the stretch with runners on base.

Originally founded as an off-shoot of Little League, it changed the name to Dixie Youth Baseball. Many accuse the organization of changing its name to hide it’s troubled racist history.

But apparently many parents in the south disagrees because it has roughly 150,000+ active players with over 900+ affiliated town rec leagues in 11 southern states.

Dixie Youth Baseball is for kids between six and 12, and hosts yearly tournaments and World Series events that bring together teams from different regions.

Fatherly offers an unque insight into Dixie Youth Baseball League. You can read it here.

Little League has been the gold standard of youth baseball for the better part of a century. Now in its 75th year, Little League remained mostly unchallenged during much of that stretch.

Founded as a non-profit organization in Washington, Pennsylvania, PONY league organizes youth baseball and softball league and tournament games with over 500,000 plaers pariticpating with 4,000 local leagues in the US and 40 countries.

Players aging from 4 to 23 player in the two-year age brackets.

Hundreds of PONY players have gone on to MLB including Tony Gwynn and Cal Ripken Jr.

USSSA Baseball or “U Triple S A” Baseball.

The United States Specialty Sports Association (USSSA) is a non-profit which governs USSSA Baseball based on Viero, Florida for players based in US, Puerto Rico, various US Military bases and Canada.

AVAILABLE PROGRAMS BROKEN DOWN BY AGE

Please note that age designations and program descriptions listed below will vary depending on your league affiliation, your local baseball organization’s bylaws and/or if your child plays on a “rec” and/or “travel” team(s).

You may want to remember that “rec” teams are more casual and are grouped by school grade levels.

On the other hand, “travel” teams are grouped by age and skill levels. In order to determine the age, most leagues use May as the cutoff month. In most cases, players born in May have the flexibility to play with their friends at the same grade level or “play down” to a lower grade. To read more about the pros and cons of this situation, read my post SHOULD MY KID PLAY DOWN by clicking here.

Sometimes you will encounter designations like 11u, 12u, etc. This format is mostly used by travel teams to note the age group (11u = 11 year olds). Rec teams are formed at the grade level.

I have outlined some basic items you need for each age group but you should read my post WHAT BASEBALL EQUIPMENT DO I NEED FOR MY CHILD post here (LINK TBD) for more detailed info. 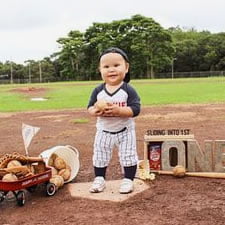 What is the cut off age for Little League?

What does 8u mean in baseball?

The abbreviation 8u is the 8 & under league, 14u is the 14 & under league, etc. A player’s age as of January 1st determines the age in which the player is eligible to play the following year.