You are here: Home / Positions / Catcher / Why Your Child Should Be a Catcher

In youth baseball, catchers are used starting from 2nd grader. You have no shortage of kids wanting to play catcher because many kids think it’s cool to put on the gear and play.

But once kids realize that catcher is the most physically and mentally demanding position on a baseball team, the number of interested players quickly dwindle down to two or three players.

Most recreation leagues provide teams with a set of catcher’s gear for the season. For travel players, you must purchase your own gear from the beginning. I highly recommend that you purchase a new or used catchers gear for your child, even if he is playing at the recreation level only (Link TBD)

But one thing I realized not until later was that being a catcher allows your kid to gain baseball or softball knowledge that much quicker than anyone else on the team.

Baseball is just about the only sport where the size does not matter if a player possesses high baseball IQ and decent athleticism so trust me when I say that playing a catcher position will give your child a definitive advantage over other players.

If you ever saw a baseball game for 2nd or 3rd graders, you know how slow a game can be. With that slow pace, especially with balls hardly ever getting to the outfield, it is not surprising that many outfielders lose interest and start to play with grass and flowers. Even infielders are not immune to boredom (ever see that playing with infield dirt)

Well, no such boredom for being a catcher! Catchers are the only ones who face all their teammates and they are also closes to the batter. Plus catchers have to receive a ball for every single play so there is no time to get bored!

As they get older, the pace of the game quickens and the position requires demanding cognitive skills, such as the ability to keep track of many things at once like pitch selection, opponents’ base running, teammates’ defensive alignment, etc. while being forced to make quick decisions.

It’s then no wonder that this is one position in baseball or softball that will increase the likelihood of your child becoming a leader (Harvard Business Review (HBR) Making Mobility Matter, “…the role of the catcher in professional baseball illustrates the power of a single position to develop leaders…”).

Speak Up and Get Your Child’s Opportunity

Why do kids lose interest in playing catcher so quickly? The novelty of being a catcher wears off because it is the dirtiest, sweatiest and most thankless job on the field. 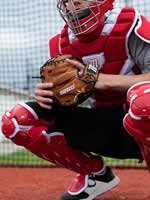 On top of that, youth pitchers tend to throw a LOT of wild pitches so it is not uncommon for a catcher has to get up and chase down balls more than 50% of the time which can get quite tiring, especially on a hot day.

But the trade off for all that physical work is that your child will be NEVER be bored during a game.

My son’s team manager played quite a bit of “daddy ball” (his son played pitcher, catcher and shortstop pretty much exclusively) until he was replaced so other kids, including my son, did not get much opportunities to be a catcher until their 12u team.

Don’t despair if your child does not possess these traits and skills yet. With proper training and drills (see my catchers section) and playing time, they will come.

Even if you think your child is not athletic, these core skills can be acquired over a period of time so I don’t give up! Because my son was one of the bigger kids and growing, he was bit clunky but he turned out to be a very good catcher with lots of practice.

Lastly, catchers do not have to be the fastest runner or have the high batting average. These metrics are nice to have but having a catcher with super high IQ and instinct is worth far more (which is why Major League Baseball catchers are get to play with so-so BA and OPS).

With unfettered view of a “battle field”, a high baseball IQ catcher with strong vocal leadership can make a tremendous difference on team defense.

Like a field general developing and coordinating battle plans, catcher needs to quickly process what he sees on the field and help his teammates act.

Sometimes that means calming down a nervous pitcher; sometimes it means yelling at an infielder to direct a throw.

Like a strong and disciplined general, a catcher who is confident with his knowledge and can quickly make sound judgement calls makes it easier for his teammates to follow.

They must know the game, read the situation and communicate with their teammates to lead.

The “5 tools” of baseball are well documented: hit, hit for power, run, throw and field. These tools are routinely used evaluating a player from young to old.

But the intangibles like high baseball IQ and instincts are great differentiators to separate good players from great players (and coaches are drawn to players with these qualities).

It is absolutely imperative that catchers be alert at all times so that they can react and direct teammates.

This reaction time is incredibly short so catchers must have situational awareness (requires high baseball ID) and instinct to react to a critical situation without delay.

For example, if a catcher is back-picking (i.e. picking off) a runner at first base, they have to see (out of the corner of their eyes) a runner being lazy in returning to base, then quickly get their body into position to throw to first behind the runner.

This ability to back-pick a runner at first is a direct byproduct of knowing the game and letting your instinct takeover.

And the only way to gain high baseball IQ and turn it into instinct is to play as much as games as possible (i.e. repetition) and hopefully as a catcher.

And you can tell players with a high baseball IQ and instincts because they are fluid and make difficult plays look routine.

Catcher pop time refers to the amount of time it takes for a catcher to make a throw after receiving a pitch. Having the shortest or quickest time from catching and throwing a baseball to second base give him the best chance of picking off the runner.

However, I would like to point out that although this is an important metric, the ability to receive the ball cleanly to get strike calls for your pitcher should be the primary focus.

Setup, stance and quick reaction time all play an important factor in becoming a good catcher, preventing runs and baserunner advances by blocking balls in dirt ranks much higher than fast pop times.

When it comes to throwing in general, there are two distinct forms: short arm or long arm actions.

Most pitchers (example: Madison Bumgarner) and outfielders tend to have longer arm action than infielders because they have more time to throw.

But infielders, including catchers, do not have that kind of time luxury. For catchers, they must be able to make quick and strong throws to pick off base runners and prevent stolen bases.

Most, if not all MLB catchers, have a powerful short arm throwing motion.

Here’s the bottom line. If a catcher can’t block well, they can’t control the bases! That means costing runs and loss of respect of their teammates

And catcher blocking drills (like the one in the video above) are only helpful if you know how to block the baseball the CORRECT way.

If is no baserunner and less than 2 strikes, there is no need to block the ball (if there are 2 strikes, the catcher must block to ensure that dropped third strike is properly handled).

But in most situations, a catcher must do everything possible to keep the ball in from of them.

Baseball is all about deception. From fake bunting to throwing fastballs and breaking pitches, there are lots of strategies that go into winning a game. 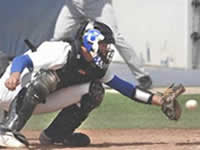 One such deception is one skill that is not discussed in open: receiving skills.

Just ask Steve Yeager who has a 15 year experience in the big and was a catching for the Dodgers:

I surmise that receiving skills are undervalued because it is very hard, if not impossible, to measure with numbers.

That means a prent that could teach proper framing skills efficiently at the lower levels will increase the chance that their child will be valued by multiple teams.

Yes, being a catcher is both physically and mentally demanding. But the reward is just too great to ignore.

Had I been more aware of the positives when my son was younger, I would have definitely been more vocal about getting him the opportunity to be a catcher (and spent more time training).

Pros of Being a Catcher

Cons of Being a Catcher

Frequently Asked Questions About Being a Catcher

Isn’t being a catcher dangerous?

Being a catcher is the hardest position to play, both physically and mentally. He or she is most likely get bumps and bruises than any other positions. So it’s important to buy them a well-made catcher’s equipment and accessories to minimize the injury risk.

How hard to MLB catchers throw?

Is catcher the hardest position in baseball?

In addition to having many responsibilities like watching the runners, making sure no on is going to seal, calling for right pitches, catchers have to wear bulky protection equipment and squat up and down for 3+ hours in a game.

Coupled that with foul tips (erratic ball path) that can cause serious injury, yes, catcher is the hardest position in baseball but also the most satisfying.

What is the most important catcher’s skill?

It is generally accepted that hitting is the most important skill in baseball. But because finding an athletic catcher with high baseball IQ and strong arm is hard to find, most big league teams do not emphasize high batting averages for catchers.

Can catchers play other positions?

Yes. Most catchers have great footwork which allows them to be great infielders. The best example is Craig Biggio who started his first three seasons with the Houston Astros as a catcher. He was then moved to second base where he thrives for sixteeen seasons which help[ed him into the Baseball Hall of Fame.

What is the average career for MLB catchers?

According to Encyclopedia of Baseball Catchers, the average career for MLB catchers is around 2 full seasons due to risks of injury as well as repetitive action of crouching behind the home plate. This repetitive action usually causes chronic knee problems for many players (but can be minimized with strength conditioning and exercises)

Who is the best baseball catcher of all time?

As of 2020, there are just 19 catchers inducted into the MLB Hall of Fame.

Why Don’t I See Lefty Catchers?

In youth baseball, you will see left handed players as catchers, third base and short stop. However, as you get older, you tend to see less left handed players at these positions because , as the left-hander Bill Lee states, “Lefties can’t play catcher because your head hangs over home plate when you make a tag.” “You’ve got the ball in your right hand, you’re blocking the plate with your left foot. When you go to make the tag, you’re exposed. A lefty catcher would get killed.”

You May Also Want to Read